My website (www.svnereida.com) has several tracking/position options - go to the 'Travels' tab for links. Also, the www.QRZ.com page for my ham callsign VE0JS has a Google Earth map showing my track.
Now that we're close to the coast, www.marinetraffic.com will show Nereida's position - very frequently updated - useful once in the Strait of Juan de Fuca and getting close to finishing.
See my website for updated ETA info (top of any page)
***************************

Thursday 7pm A beautiful, sunny, peaceful, calm afternoon, with both Vancouver Island's mountains and those of Washington state clearly visible: Canada to NE and USA to SE. (Almost a repeat of yesterday's entry!)
A humpback surfaces in the distance - its tail flukes lifted for me to see...
Wind well down- Superwind (wind generator) blades haven't turned for a long time, showing that any slight wind has been less than 6-7kt all day - but it's now from W-NW and has just increased slightly - instead of a glassy calm surface, there are now tiny ripples...
Just before dawn, the ebb tide will be lessening in the Strait entrance, which is 19 miles away, and will be 1 kt or less from ~5am on. The tide will then change to a helpful, but not very strong, flood for five hours from 6:30am to 1pm, roughly. The wind in the Strait is supposed to be from W and becoming 10-15kt from midday to midnight.

8pm Decided to get underway early, even though only at a crawl in the nearly non-existent wind. Worried that if I don't move now, we'll not beat the ebb tide when it gets strong around midnight and we'll not make it down the Strait again - as last time

Still a total of 80 miles to go and if we can keep up an average of 4-5kt from midnight on, we'd get to Victoria around 4pm - 8pm tomorrow, Friday ... We'll see how that works out - sounds too good to be true

Midnight Lovely starry sky but not much wind still - sails not filling very much. Coming up to maximum ebb in two hours' time and SOG now is around 1 kt. Heading is just S of due E as we pass into the middle of the shipping separation scheme, well before the Strait entrance.
No moon seen now - it was half-moon earlier with a bright planet hanging just to its SW. Sound of throbbing engines is coming faintly over the water from ships a distance off.

4:30am Wind died, fog came down and ebb increased, so I've spent last few hours calling oncoming ships to make sure they avoid us as we drift with the tidal current,
mainly E-ENE, which took us over the edge of, and just into, the W-bound traffic lane - not a good place to be. Prince Rupert Traffic controller has been helpful, as usual, and as the tide changed to flood, it finally became easier to head on our preferred course of ESE, rather than struggle to keep going in any direction except backwards while trying to keep out of the traffic lanes.

6am Day breaking now - good to see something, despite the fog... Can see about one boat length away and everything is dripping wet. Back into fleeces and a warm hat! Finally able to keep a good course, although still little wind so only making just over 1kt in a W wind.. water surface very smooth-looking. A tug and tow was avoided and another cruise ship 'Norwegian Joy' headed E to unload her passengers - come down from Alaska, no doubt.

7am Beginning to pick up some speed with the flood tide picking up - maximum is in two hours' time, then two hours more before slack water when the tide turns and the ebb starts up again. The worry then is not having enough wind to make way against the strength of the ebb tide. There's still very little wind now but at least the later ebb tide is a lot less strong than the earlier one.

7:45am Fog has lifted - but not the flag (ensign) which is drooping on its flagstaff at the stern. Seaducks are calling again through the otherwise silent air. It's grey and murky ... and very damp... and our speed hasn't got above 2kt still. Kept hearing a whale blowing and then finally caught a glimpse of its back - another humpback. A pair of sea-lions came by, inquisitively.
Time for breakfast - last of my eked-out cereal....and last of my fruit juice.... I made some fresh coffee.

10:45am Passing Duncan Rock, 1.8ml to S. Wind got up nicely over half an hour ago - we were making over 4kt at times - but now it has died right down again - think we might be in lee of Cape Flattery, 3.4ml to S, since wind is from S quadrant. Just went goose-winged with staysail to starboard, and changed course a bit to keep more in middle of the Strait, hoping to get more wind. Only 40 minutes of flood tide left, then the ebb - but might have just enough wind giving enough boat speed to keep going E as ebb increases... Fingers crossed. Making 2-3kt now.

11:40am Passed into Seattle Traffic area of responsibility in the Strait. Sun beginning to shine. Wind still rather light so we've slowed right down again... Had hoped we'd keep up our good speed for rest of today....
Having a nice, warming mug of soup - it's chilly!

ETA: Looking like early Saturday morning, since clearly won't make Victoria in daylight today - still nearly 60ml to go which would take 12 hours if we averaged 5kt - and we haven't once made that speed yet today.... Need some decent, consistent wind to give good speed. (The weather gods seem to have decided to send their usual light winds into the Strait where we are now, to slow us down...)

1900GMT = midday PDT (Pacific Daylight Time) - end of Day 338. We made 22 n.ml. DMG, measured in a straight line between the two 1900GMT positions. A lot of drifting, hove-to, waiting for wind, after unsuccessful attempt to get into Strait towards Victoria over Wednesday night. 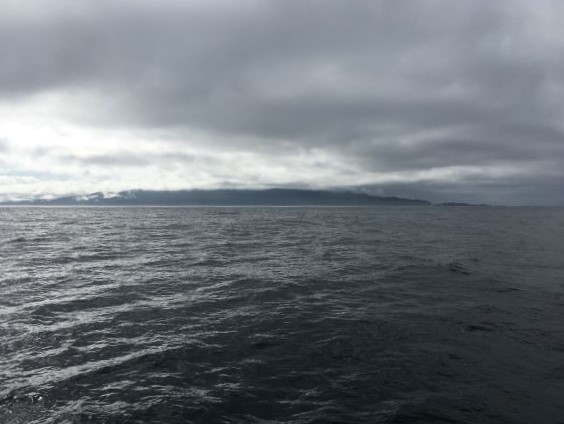