Thurs 12:45pm Sun shining - no rain clouds close by! Possibly in distance but not for a while at least.. Making excellent speed, 7.1kt, in NE 16kt, heading SSE. A bit bouncy, heading slightly upwind, but nice to see the blue sky back again, with scattered white clouds.

Had interview with Sharon, KD2GUT, in New York, at 1pm PST for a ham radio audio magazine - made possible by Jim, WB2REM. We made good contact on HF radio on 21234kHz - propagation just got better and better and was excellent - really clear - by 1:20pm/2130GMT and after.

2.45pm Yay!! Definitely seeing some solar input into batteries - 4-6A net gain! Great to see it.... Sun is shining brightly as I write this. I went up on deck to adjust angle of panels - think it helped input.

Fri 10am Checking weather info over coffee after usual morning clear-up in the galley.

At midnight, we were passing the small atoll named Ducie Island - well-known in ham radio 'DX Expeditions' circles - one of many remote places hams go to and set up transceivers to make contact with other hams all over the world. 10,000 (maybe 100,000?!) or so contacts made during the fortnight of the last expedition there, not so long ago. Callsign was VP9D. Nearest inhabited island is Pitcairn, which lies 280 ml to our W as I write this now.

No more rain overnight nor today - clear sky at sunrise with increasing scattered cloud over the morning - now 30%.

Wind got up last evening - we were making well over 7kt, well-heeled in 18kt wind for quite a time and Fred was struggling to maintain our course - finally put a reef in just before sunset. Had a small problem adding the first reef 'strap' around the boom - had to extend it slightly, to reach the reef cringle, with another Spectra climbing loop. Of course, predictably, once I'd gone to all that effort, the wind eased a lot a few hours later! Being night-time, thought best to leave it in - but come sunrise and a clear sky, it came out very fast... Wind is still fairly light but better - 12kt. With full sail, we're making 5.5kt on a beam reach. According to forecast, wind will be slowly dying over the day and backing.

Easter Island is 830 ml to our SE - we'll be passing due W of it early tomorrow morning, if we keep up our present speed. After that, the next islands close by our track will be on the coast of Chile - over 2,500 ml to the SE now.

Today's mini-project has been to support the big JSD (Jordan Series Drogue) bag on the pushpit - it's looking rather droopy and I'd hate it to fall down while underway (or when deployed) because the straps holding it in place have given way. I've found a good sturdy strap with a strong but easy-to-use closure - that was today's important job. Feel more relaxed knowing the JSD bag is well-supported.

One radio session just started, that's working out quite well, is between myself, Mark on 'Maverick' and Susanne on 'Nehaj' - we're all headed towards the Horn and not too far apart, so radio contact is quite good. I'm just over 1,000 ml to the N of the two of them. Susanne is not in the Golden Globe Race but is at 45S, with Mark 570 mls ahead of her and Uku on 'One and All' over 1,000 ml behind her. 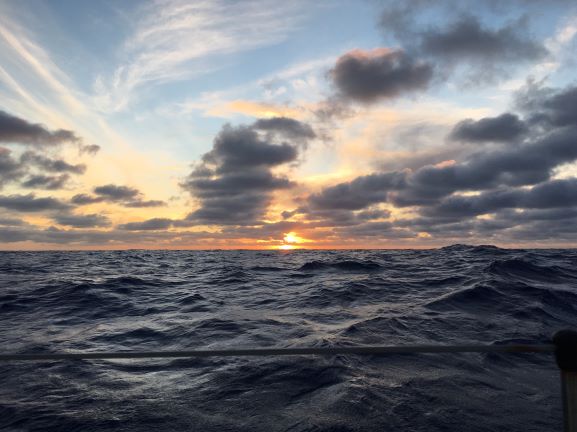 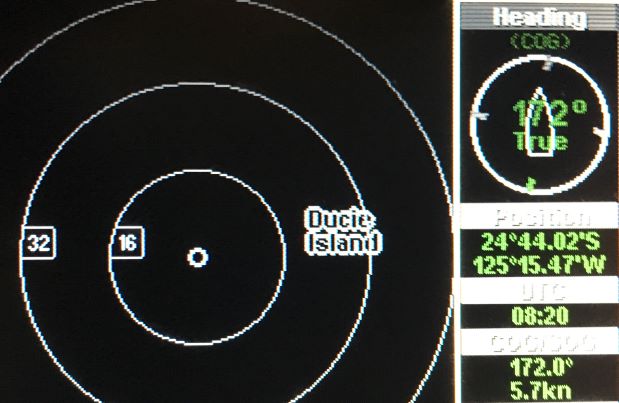 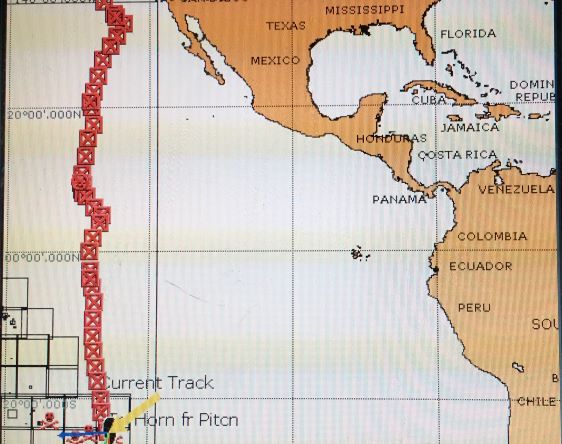