Tuesday midday - Going to have to gybe around - wind seems finally to have decided to come determinedly from SW. I don't really want to head NE so need to adjust our sail plan and head in a more sensible direction!

2:30pm Just hung up my dripping outerwear after finishing gybing and lowering the genoa pole - everything on deck is soaking wet from previous heavy rain. Total overcast - murky, dull grey sky - and slight drizzle- just enough to make sure you get thoroughly wet! Found that one pair of deck shoes is definitely NOT waterproof... Wet hair, of course. Having a major re-think about what I should now be wearing - total change of mindset. Digging out the stored-away layers and wet-weather gear...

Wind is very light - 4.4kt - from mainly WSW, although it's obviously not too sure where it's supposed to be coming from. So we're no longer speeding along - in fact, we're lucky to be able to keep making way in a given direction at all! Fortunately, Fred is pretty good at keeping us headed on a beam reach in light conditions - I just hope the wind doesn't die completely... Course: ESE SOG: 1.3kt!!

3.30pm Just finished wax-polishing one boot, had made a warming Cup-a-Soup for in between starting on the second boot... Glanced over to check how we were doing - we're heading SW at 2.5kt in NW 7kt wind...... Being on stbd tack, we just turned with the wind...

On deck we go - need to get us on to a broad reach... Later: All done - ambling gently in intermittent fine drizzle or heavy rain. Making 2.8kt SSE in 7kt NW wind. Back to waxing/polishing that second boot - going to need it - hopefully, it'll be fairly waterproof!

9.30pm Wind has just come up - to 12-15kt from NW. So we're actually making around 5kt - up and down a bit with the wind which keeps varying in strength. Still overcast but dark, of course, now.

Swell has not died down much so it's been fairly noisy as well as uncomfortable with little wind, until now, to keep the sails filled as we roll around in the swell.

Wed 6.30am PST Sun trying to get out from overcast sky - it's actually quite bright. Wind stayed fairly constant but light from NW overnight but we were slow - trying to make SSE without poling out the genoa was not good and our speed suffered. About to gybe around and use pole for genoa to make a better course - presently making almost due S at 5.1kt. Wind possibly increasing - now 14-15kt.

8am Takes a long time to organise and double-check everything when changing things around...
Of course, wind has died back now, to 11kt, so speed is down to 4.5kt but our course is SE, not due S. Hope we benefit for a reasonable time from my efforts - I'm more than ready for breakfast!

Weather looking very mixed for next few days. By time we finally get close to the Westerlies, it looks as though it could well be just in time to get caught by some very strong winds...

10am Occurred to me that now, while not enough apparent wind for wind generator to make use of, was a perfect time to get to my solar panel re-wiring. Plan B is to feed one 150W PV panel into the Superwind regulator (as allowed for by manufacturer). Had a good look at the regulator terminals involved and it looks very straightforward. I've plenty of the ring and spade terminals that I'll need, as well as enough wire for the job. It's a bit rolly, but shouldn't make the job too difficult. Best to grab the opportunity while in reasonable conditions - not a job to do in stormy weather, for sure! 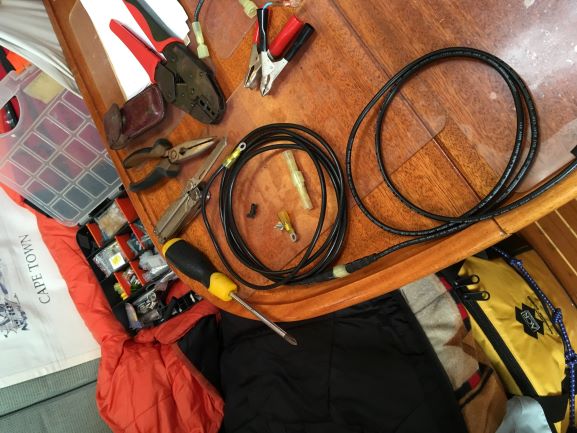