Wednesday
Grey, murky day with hardly any sight of the sun and occasional rain.

Had the usual radio chats both during the day and in the evening - becoming a regular part of my day and it's nice to hear familiar voices coming up to ask how things are going. Discussed solar panel wiring with Bob (decided not to use wind generator regulator for the time being), spoke to Mark on 'Maverik' and Susanne on 'Nehaj'. Listened in to the weather forecasts given to the various boats in the Golden Globe fleet by Ian, VK3MO, in Melbourne and chatted afterward.

Spent more time checking the panels. At Bob's suggestion, "Back to basics!", I'd tested the panels and deduced, with the help of a small 12V boat fan, that they are both putting in power, even when very little sunshine, so that was good, but their working voltage was very low, indicating a problem in the circuit somewhere. Hence my careful re-tracing and checking of the earth lines to see if I could find a bad spot..

Thursday
'oh-so-dark' 3.30am! Wind gusted up to 24kt and backed to WNW from NW 16kt - we were heading SE but are now heading E-ESE. Waiting to see if wind shifts back again. If not, we'll need to gybe round and head more S.

5am First light - gybed to get onto starboard tack and not long after the boom had swung over, it jerked upward and I soon saw that the rod-kicker (that supports the boom) had come away from the mast - the connection had failed. I reefed the mainsail, as I'd intended anyway - and more so now, to put less stress on the boom while i investigated the situation and thought over my options - I was not a 'happy bunny' at this point....

The fitting had basically torn all the rivets out so one thing that needed to be done was to get rid of the remaining protruding rivet bits - out with the hammer! Clearly, the fitting was not going to go back snugly where it had been - but I decided I could lash it around the mast so that it would be more or less in place, moving very little ... So I set to - and by 6.30am was satisfied that I'd lashed it reasonably well, using Spectra line..

I was making a log entry, noting what had happened when I glanced over at the voltage/amps display for the batteries - instead of showibg the usual discharge of around 3amps it was showing a net charge of 2-4 amps - wonderful!!

That definitely made me feel quite a bit better! I'd spent all yesterday working on the solar panels wiring and had ended up replacing a connection on the two earth lines down fom the panels It was corroded, although not too obviously so from the outside. Only because I now examined it closely did I spot a tiny bit of green - copper sulphate... corrosion... if I could see it on the outside, it had to be far worse on the inside.

By the time I'd finished replacing the connection with a totally different, sturdy one, it was dark - so I had to wait for sunlight today to see if my efforts had turned out well. YES!! It is great to see a charge of 5A going in now, despite the sun struggling to shine through the overcast sky. I'll be keeping a careful eye on the battery voltage - ready to 'pull the plug' if needed...

Back to this morning's big problem... Having seen what had happened to the rod-kicker connection, I felt sure the boom connection could fail in a similar way. It is similarly riveted and subject to the same stresses caused by the sail jerking around in the swell, in light winds, jerking the boom as it does so.

Not wanting to risk a repeat failure and losing use of the boom, I've now lashed the goose-neck fitting to the mast with some thick Spectra line. If the rivets fail, at least the lashing will hold the boom in place, I hope.

9am Time for breakfast - and maybe a short nap while conditions are easy... We're making just under 5 kt in W wind of 10kt - but first I must lower and stow the genoa pole ....

10.45am Having dealt with the pole, I had a short nap, having been up since 5am... The wind must have seen me - it went to a light SSE while I slept - I woke up to find us heading NE!! Got the boat moving as best as possible - SW... Not a direction I particularly wanted to head in, losing miles gained so far towards the Horn.

(Later: Eventually, with no sign of any change in the wind direction and confirmed by the weather files as being settled like this for quite a time, I decided to heave to - I stopped the boat! It's peaceful and relaxing and I can tidy up, sleep, maybe even have a sundowner to celebrate my solar panels' input to the batteries (and reciprocate the many "Happy Thanksgiving!" greetings from my US friends. 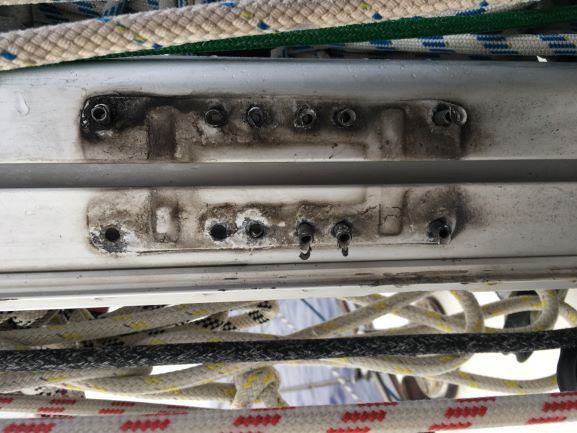 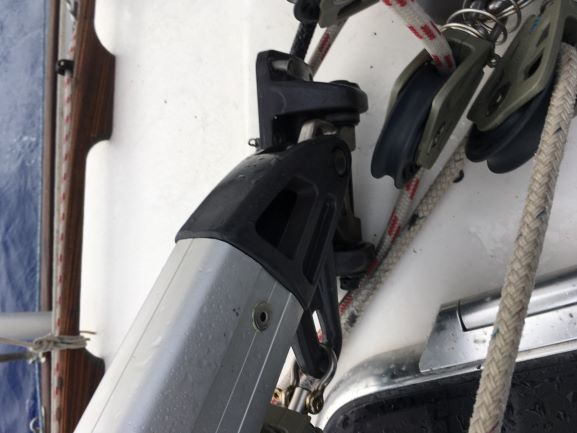