Saturday 5:15pm LT Slight drizzle from usual grey overcast sky. Took a time to sort all lines etc out but, with wind eased and backed, finally gybed around onto starboard tack to make rhumb-line course towards Cape Horn again.
Running the staysail means the extra job of changing over the running backstays in addition to changing over the boom preventers since we're running downwind on a broad reach. Having had to shorten the boom ends of the preventer lines makes them slightly more awkward to reach in order to make the changeover, even though the boom is centred midships as we gybe over. Would be nice to be slightly taller at times!

Looks as though the wind will be around 22-23kt from WNW for a time now. Seas are heaping up a lot astern - always fascinates me to see how we lift up over their steep faces as they pass under us! They're easily 4m/13ft now, probably more - always difficult to judge their height.

The next strong blow is likely to be Tuesday evening and then Friday overnight into Saturday is looking even stronger.

Occasionally see a colourful patch of lighter aquamarine with streaks of white foam on the sea surface where a tumbling crest has collapsed into a lot of air-bubbles. Generally, everything is grey - both sea and sky.

7pm Raining and getting dark. Finished shaking out 3rd reef - well overdue, with wind definitely having moderated a lot from mid-twenties earlier. The big problem with getting wet is that things never seem to dry. I hang them up and when I next look at them, they're likely to be still wet or, if partly dried, they stay forever damp. Makes Goretex, or similar, pretty vital for comfort.

Spoke to Susanne on 'Nehaj' after the Pacific Seafarers' Net - she's lying to her Jordan Series Drogue, staying safe in 50kt winds. She'd deployed it five hours earlier and is likely to lie to it for a day in all. Good to be safe in big seas and strong wind....

Mark on 'Maverick' is trying to round Cape Horn. He had gusts of 50-60kt winds and 7m seas today but kept going - but now those winds have died completely and he's got ten miles to go but only 10 kots of wind with the same big waves. Frustrating for him! He must be pretty tired..

9.30pm Just ended a half-hour radio session on 7160 - someone had posted that I was on frequency and that brought in a lot of new contacts to add to the usual ones. Propagation to Florida and up to Minnesota is clearly good at this time - a lot of strong, clear signals.

Sunday 03:30am LT On radio to Mark - he'd rounded the Cape in light winds but they just got up to 35kt from the NNW - he's had to reef down again but is happy to have made it OK. As I was talking, I saw our wind suddenly gust up to 30kt... I cursed becasue I'd not long shaken out the 3rd reef and here it seemed I needed it in again... As I got into my foulies to go on deck, I saw the wind begin to ease a little - but it then backed to SW from NW. A Front must have passed through. The wind eased to 22kt but stayed SW - so, thankfully, I simply needed to adjust Fred to change our heading relative to the wind and take up on the sheets. We're now close-hauled but expecting the wind slowly to veer again - it should be from due W by tonight, if not before.
It's getting light and there's a streak of clear sky on the horizon...

7am It's a lovely sunny day with scattered white cumulus - unusual! Wind ~20kt from just W of SW, still slowly veering - adjusted Fred a touch more. Pressure has jumped to 1009 from 1005hPa.
Studying the weather files - a constant preoccupation... several times a day, as the wind changes. Still expecting strong wind on Wednesday.

Midday - Unbelievable! In no time, a band of cloud spread over the blue sky bringing really gusty conditions - wind veered to W and gusted nearly to 30kt. Finally settled back down to ~24kt, backing again to WSW. Adjusted course and trimmed sails for broader reach...and then had to undo it a short time later... 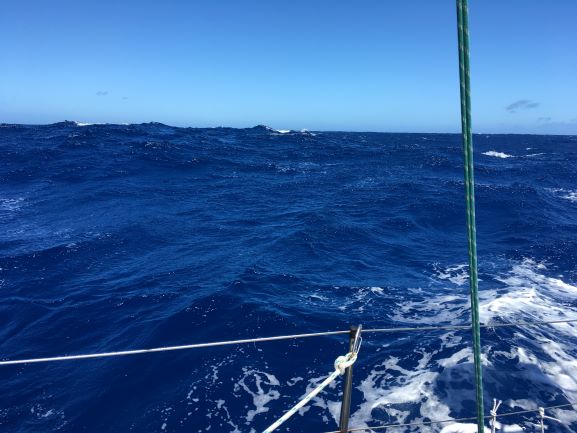 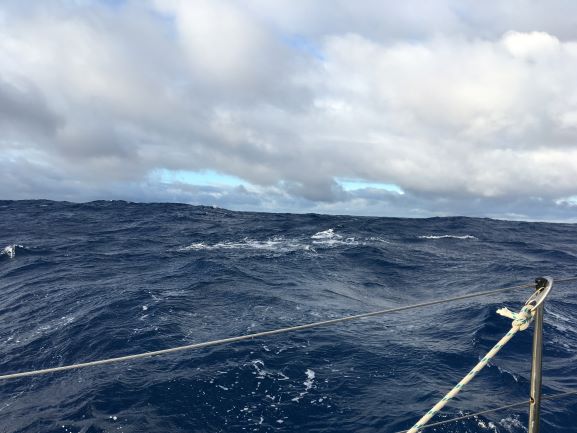 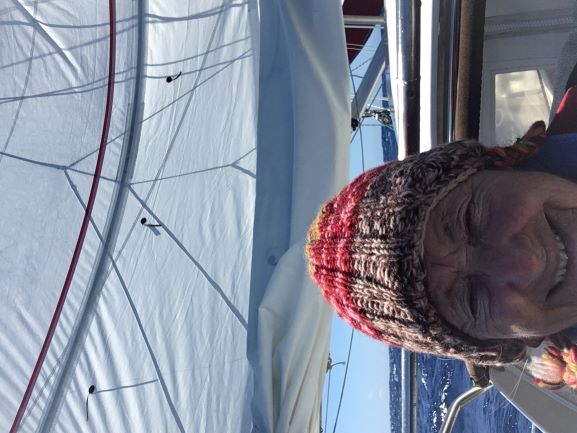