Sunday 1:15pm LT Back to a cloudy sky - the blue sky and sunshine of this morning didn't last long. I was amazed at how quickly the edge of the cloud layer came over - bringing with it a gust to almost 30kt and a veering wind. Things have settled down now to a fairly steady 20-22kt wind, which backed to WSW, shortly after the big gust. Weather changes very rapidly down here - we're in the 'Roaring Forties' now...

1:40pm A mainly blue sky and sunshine again - wind WSW 24-25kt. 4m/13ft seas are throwing us around as they pass us, even though they're more on our starboard quarter than abeam.

11:50pm Went up to adjust Fred - a beautiful, but chilly, starry sky - spotted the Southern Cross with its Pointers - unmistakeable...
Trying to keep a bit E of rhumb-line course to the Cape - hoping to keep out of strongest winds over Tuesday night into Wednesday. Might have to head more E nearer the time - we'll see!

8am Replaced genoa with staysail - on a broad reach, so can't fly both. Having breakfast while I think about shaking out a reef and check the weather...

11am Having coffee - a measure of the seas having lain down a bit is feeling I can safely put on the coffee pot (if I stay close by)! Sun is getting out quite often. There's a thin cirrus layer overhead and blue sky on the horizon - a pleasant day.
Took an age earlier to release the 'nettles' and reef strop before shaking out the reef - having attached them from the opposite side, it was difficult getting to them, not helped by being perched up in the cockpit in the fair-sized swell... I decided to leave reef1 in after looking at the weather forecast for the coming few days, although that means we're a bit slow.

There's a system passing by overnight tomorrow (Tuesday) into Wednesday which I'll be trying to avoid the worst of by heading East for a time from tonight. It will reach the Cape area on Saturday, with a 'squashing' effect resulting in even more strong winds as it passes below the Cape - I'm hoping to stay well to its N, out of the strong winds, as it heads SE.

Then, as we get nearer to the Cape early next week, there's a really big system following close behind that looks almost impossible to avoid, it's expected to be so widespread, with 40+ kt winds, gusting higher, and 8m+ seas. It's expected to begin to arrive at the Cape soon after next Monday. I might have to heave to or, more likely, deploy my Jordan Series Drogue (JSD/series drogue) to stop the boat and stay safe if we expect to be in the middle of such strong conditions. 8m/26ft seas, probably close-to and therefore steep, are nasty!

Weather changes very quickly down here but the system is almost certain to arrive pretty well as forecast. All I can do is to try to avoid the immediate threat while keeping an eye on possible future problems. Not being a racer, my priority is to stay safe, even if that means stopping or going slowly at times - no problem!

Second photo (by request!) shows my 'ham shack' - my chart table area in the main cabin with HF/SSB Icom radio and Pactor modem. 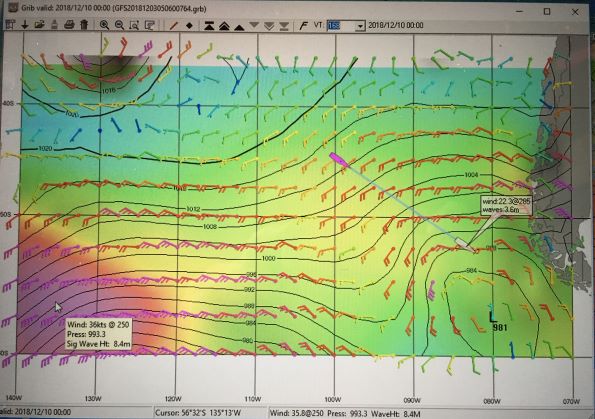 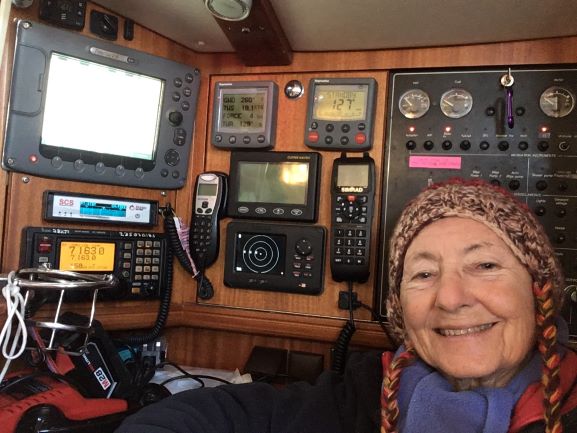