Monday 3pm Lovely to see so much sunshine peeking between the broken clouds this afternoon.
Just finished a radio chat on 17m - nice when propagation is good, as it was today - can have a proper chat with no noise on frequency.
I was pleased I'd left the first reef in when the wind gusted up to the low twenties for a time under a cloud - we were galloping away at 6.5kt or so but are now ambling along more sedately at 5-5.5kt in WSW wind of 14-16kt.

With temperatures down to 11C/52F in the evenings now, I'm about to make a beef curry again - the last one was excellent, with potato and spinach added - it lasted easily two main meals and is really tasty! The ambient temperature is low enough now for me not to fancy cold meals of an evening...

5:30pm Curry made ready, to have with Basmati rice and mango and lime pickles. Was hoping to have it after enjoying a lovely sunset, with it having been so sunny for most of the day and an almost clear sky this afternoon but a cloud layer has spread over half the sky from the W.

Will leave sail trim as it is for overnight, although will have to gybe onto port tack as and when wind veers into NNW as forecast. We've light winds at present, close to the High pressure system we're skirting around (pressure has been building over the day and is now 1020 hPa)

Light is fading now. Will have my food while it's hot.

9:45pm Well, sunset did go well, in the end, with the area of low, grey cloud away from the sun just then. The cloud was a marine layer - very low down, waiting to drop as fog, given half a chance, and far lower than the cirrus layer above it.

We're now grinding to a halt - or nearly so - making only 3 kt in 6-7kt of W wind. We're clearly not far from centre of the High pressure system to our NE. The strong N wind is forecast to arrive around late afternoon Tuesday. Seas are right down, with very occasional rolling as a bigger wave finds us.

On the radio I've made excellent contacts on 40m, two nights running now, with stations in Chile - both from in or near the capital Santiago which is about 1,500 miles to the NE.

Midnight Gybed around to head E after taking in 2nd reef - not so simple now starboard lazyjack is missing so took quite a time - decided to do it now while it was easy - we're still making nearly 4kt - I'm quite happy to go slowly in view of weather forecast over next few days.

9am Still heading E in 11kt wind just slightly W of N, making ~5kt on a beam reach. Back to overcast sky. Waiting for wind to begin to build more and will then reef down again ready for the expected 30kt winds for the next day or more. Still full genoa to help boat speed. Seas down quite a bit in the consistent fairly light wind.

1800GMT = 1200 LT (GMT-6hr) Just got back down below after tidying away the lines in the cockpit - feel I've deserved the breakfast coffee I'm having now! I'd checked the weather, having downloaded fresh files, and with wind slowly building, we tacked around. Then I put in the 3rd reef - well ahead of time while it was easier to do in the lesser seas. Tying in the reef on starboard tack worked fine and we didn't lose much way, despite our heading being NW, because the boat slowed right down while it was being done. The port side lazyjack held the sail up as usual and I added a sail tie to hold the sail in to the boom before taking up on the reefing line. It's a real pain not having the starboard lazyjack available...

Having finished, we tacked back onto our course - due E - and we're now making almost 6kt, in wind just W of N at 15-16kt, with full genoa. When the wind gets up a lot, I'll change down from genoa to the much smaller staysail.

The sun is trying to get out so it's fairly bright. The solar panels are putting in over 14A - very pleasing!

Interestingly, the magnetic variation, which had steadily increased from 16 degrees E when I started out to 25 degrees E up to midday yesterday, has now dropped back down to 24 degrees E - I suspect that's because we've been heading due E. 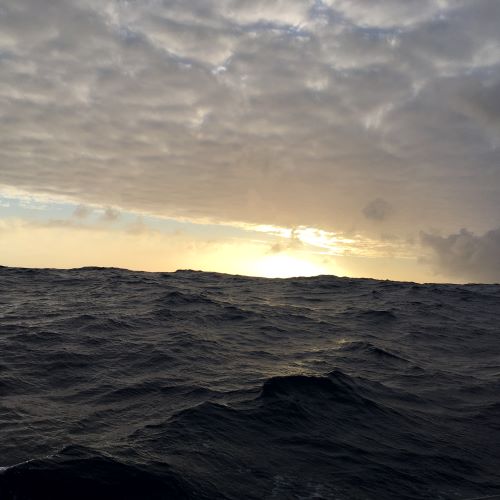 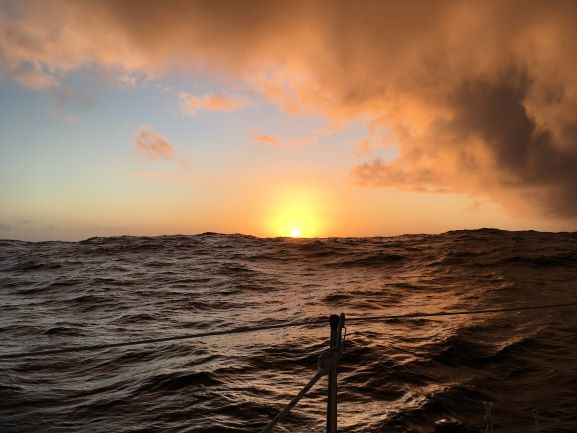