Tuesday Spoke to Mark on 'Maverick' again overnight - he was in nasty seas - like a 'tidal rip' he said - and the wind has been highly variable in direction - not very helpful. A NE wind forced him to the W of the Falklands - little choice. Amazing how he keeps going in difficult, strong conditions - but he really wants to beat Jean-Luc!! He's been working hard at repairing a bad rip in his staysail - he wants to make a really good, strong job of it so it lasts to Les Sables d'Olonne.

2:30pm LT (GMT-6hr) Making good speed, ~6.3kt, in 17kt wind, slowly building, from just W of N - we're almost beam reaching due E. (The wind is actually just 'abaft the beam'!) The only problem with a beam reach in present conditions is that the seas are likely to be on the beam also - so the 'getting-knocked-about' factor is pretty high!
Just moved my sleeping bag over to the starboard bunk - on the lee side of 'Nereida' now. I got away with ignoring being on port tack last night, with the seas being well down, but that won't work now... When it gets rough, the safest place to be is in my warm, soft bunk - preferably with a hot mug or bowl of something nourishing! My beef and spinach curry was great yesterday - and there's plenty more ready for tonight.

Midday Wednesday Been sleeping a lot, recovering from exertions last night....
Got a satphone call just over 2 hrs ago to let me know of Susie's pitchpole and dismasting at 1515Z plus a knock on the head... She was concussed and the boat is in a mess but both more-or-less OK - I hope she recovers OK from her concussion. Two days before any ship can get to her. She was, and Uku probably is now, in the middle of the system that I'm N of - the reason I headed E for the last day or so was to stay N of the same system that was heading SE, to avoid the stronger winds and seas expected to my S.

Well before sunset, I unfurled the small staysail and furled in the genoa, ready for winds to increase. As I went to put a turn of the sheets (lines!) around the furled genoa to keep it safe in strong winds, I heard a noise - the end of the furling line had become disconnected from its drum below the sail. The big headsail rapidly unfurled itself and began madly flapping in the wind, with its sheets lashing out at everything around.... Nightmare! I had to stop it from flogging and get it down somehow...
I heaved to (had to gybe around and sheet in on the main...) and pulled in on the upwind genoa sheet to keep as much of the sail inboard as possible. The problem with getting it down was that it could all end up being blown into the sea - probably heeling the boat over badly...
I had to get out on deck to release the halyard bit by bit, going forward in between to try to grab as much of the loose sail blowing in the wind as I could and bring it inboard, lashing it down if I could (I'd taken some line and sail ties with me) - it was determined to take a swim. All a bit of a struggle, with daylight fading fast.

I got a radio email message, asking if all was OK from Peter Mott, ZL1PWM: "Looks like you stopped making way at 050117 UTC and are now drifting." I'd missed the 0300Z Pacific Seafarers' Net at 0300Z so he'd looked for my AIS signal report. I didn't get back down below until 0400Z so I'd spent nearly three hours trying to tame the genoa.
The best I could do was to get most of it inboard but some ended up in the sea and it becomes impossible then to raise it with all the seawater it holds. I got some up but I'll have to wait for less big seas, causing us to roll around a lot less, to get the remainder up. It was also completely dark when I stopped trying unsuccessfully to raise any more of the sail out of the water. It's not causing too much of a problem just now, while we're hove to but I can't move on before it's all on deck and stowed securely.
That still leaves the furling line problem - it needs to be fixed back securely onto the drum, with plenty of spare turns so the problem doesn't repeat, if the genoa is to be used again.... Not as simple a job as it sounds so it won't happen this side of Cape Horn, I'm thinking. 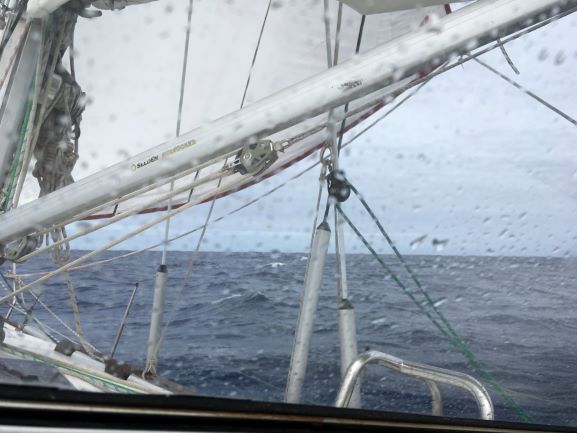