Wednesday 2pm Still lovely sunshine but cold air. Went to adjust Fred - wind has backed quickly to WSW from W. Saw two small grey birds swooping and circling around us - prions? Tried hard to take photos - SO difficult as they move so fast close to us. I take lots, in hope, and then have to spend quite a time zooming in to search each frame and deleting most of them....

6pm Warning of high winds near coast on my path if continued on present course - have changed course accordingly to stay further off the coast...

11.30pm Weather warning again - of 55kt winds on my path - even the changed one - so decided best to heave to (again!) so system passes away from us in a day's time... Have not long finished heaving-to on starboard tack - now making 0.6-0.9kt roughly due S. Missed 7160 'sched' - busy on deck organising sails etc.

Thursday 2am Spoke to Peter, Northland Radio, about warnings, along with Uku on 'One and All' who has the same weather - he's not far W. Discussed the area of risk - looks as though Nereida is rather close to it so I decided to heave to on the other tack to avoid drifting any further S.

4.15am Dawn was around 3am so had daylight for work on deck. On port tack now, having changed mainsail and gybed around. Hove-to in W18kt wind, drifting NNE at 0.5kt. Back to my bunk for some more sleep!

11:15am Wind has been slowly building over last few hours - now from WNW at 26 kt. Sun shining, at times, in between gathering clouds - sky nearly covered but a lot of it is thin cirrus and sun gets through.

Wind, which was SW, is now veering to NW and will then back into the W as the system gets close. The next system is not far behind, so. quite soon, the wind will back towards SW and then, again, go W - NW and finally SW when the centre of the system has passed. The wind pattern on the N side of these systems is invariably the same - NW ahead of a Low, becoming W, then SW as it goes off to the East. (To be on the S side, getting E winds, we'd be in Antarctica!) 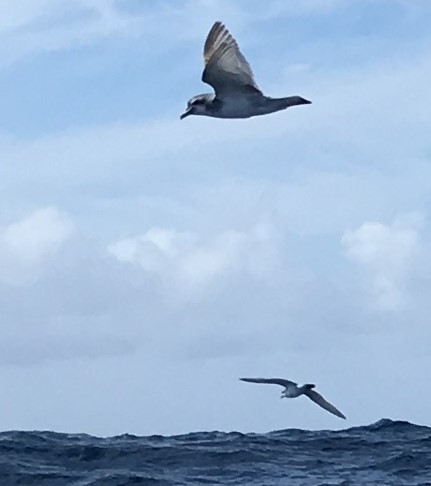 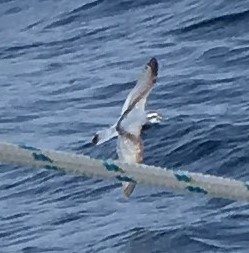