Thursday 3:30pm CST Total overcast again. Hove to still. Wind has been building but gusting up and down for most of the day - now to 29kt from NW. Waves are fairly big and the occasional one bangs into us with a sudden noise.

Pleased to find a pair of reading glasses - they'd been missing for several weeks. Had to be somewhere since definitely not thrown overboard...! They'd slipped down side of bedding in bunk.

Thinking about trying to move on S a bit after present winds have eased somewhat. Would like to get more S ready for next system to pass to North - don't like the look of its very big swells added to its strong winds... Means moving later tonight and then heaving to again once we've arrived at 55S.

10pm CST The 'blow' is up to 36kt from NW now, dropping to 32-34kt in between - seas not too bad so far, thankfully. Just the occasional one makes us lurch suddenly sideways as it hits us. Had a good few hours' sleep up to 8pm - missed out making up on sleep earlier today and wanted to be ready for possible early start overnight.

Believe we're about to drift across the Time Zone boundary (into N. American Eastern Time zone = GMT-5hr) - we're now at 082 30.7'W Our drift while hove-to started heading us NE yesterday but is now due East at about 1.5kt -no problem since we've plenty of sea room but I will feel better if we can get underway, even if only for a short time, to get further S once this wind eases - maybe around dawn or soon after.
Must get to my bunk for some sleep..

Friday 4am LT (= EST = GMT-5hr) First light - getting underway towards Cape Horn - spoke to Peter at 0810Z - several weather warnings have been lifted - looking OK to head direct....Grey rainy-looking sky - wet everywhere but no rain, just big seas from both NW and SW - biggest are from NW at 5m/16ft, probably more. Albatross, with white body and dark wings held out stiffly, gliding nearby close to the sea as I came on deck to prepare to get underway. Quite a few things to do .. including gybing the main.

5am Well underway - 540 miles to Cape Horn - about four days away.
Really being thrown around a lot by the two wave trains. Wind just N of W at 24kt.
Fingers got so wet and cold in wind, had to don my leather sailing gloves - couldn't have functioned for much longer without them. Air is 9C/48F - wind chill on wet skin makes it feel a lot less.

10am Sun shining through grey cloud at times. Wind WNW 19kt, swell a lot less now the wind has abated somewhat but still the occasional one that comes to throw us about. Having a late breakfast after a good sleep - making up for hours lost overnight..

Spoke to Uku as well as to Peter before getting underway earlier - was good to hear from Peter that 'One and All' is transmitting on AIS - that means if Uku gets close, I'll see his position on my screen (he can't see his own position nor mine, I believe) - excellent news! With him being only 84ml to my W, I'd been getting concerned since we're both headed to the Cape directly now and he'll certainly overtake me - he's going faster. I was also able to give Uku my position which he was happy to have - he doesn't want a collision any more than I do!

I almost didn't bother noting it down but Peter gave me One and All's MMSI number - I've seen no ships on my AIS screen since passing Polynesia - most never come this way - too stormy, rough and cold and Panama is a far more attractive, usually more direct, option!

Thought I'd post photos taken from Nereida this morning... 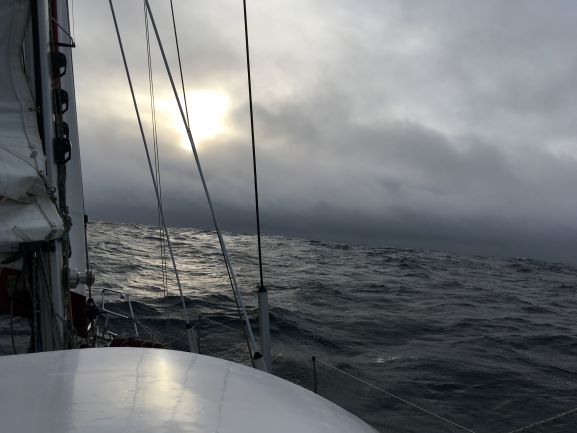 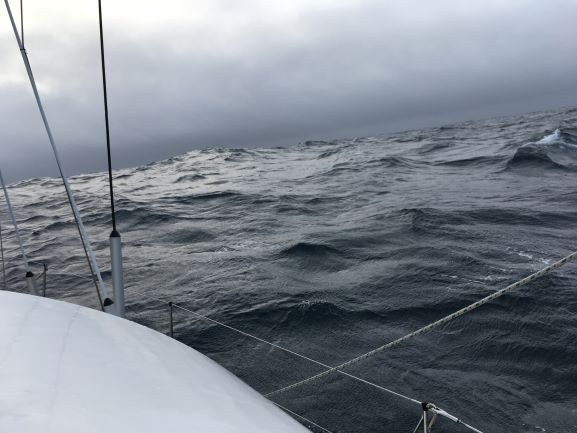 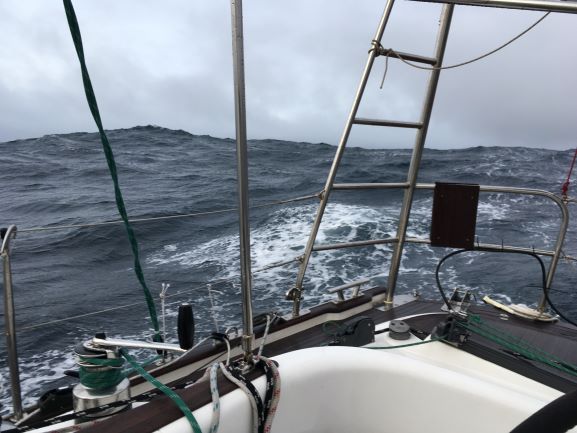