Thursday 6pm Cooking some bean and barley soup - haricot beans + chopped onion + barley - might add some diced ham once the beans and barley are cooked..! Soaked the beans overnight in a bait jar with slotted lid that I bought with this in mind (and also for sprouting beans) - makes it easy to rinse them off before cooking.

Lots of birds around - tried to video them swooping around us - lovely to see so many close by - some Great Shearwaters among them now - specific to Atlantic... Joining Wandering and Black-browed albatross, white-chinned and storm petrels and occasional prions. Also another I caught sight of that I must ID. Similar to Shearwater and maybe a different kind. Several have adopted Nereida, I think!

7:15pm Still occasional light rain but clouds beginning to show some breaks - sun not far from setting. Enjoying a warming CupaSoup. It's nice, but cold, watching the birds from the cockpit - they've almost all disappeared now the sun is setting. Wind veering quite quickly so frequent trips needed to adjust Fred.

Friday 4am - Dawn a short while ago - Clear sky except for a grey bank of what looks like a seafog layer dead ahead, on the horizon. No birds seen, as yet. Adjusted Fred.

Went on deck to adjust Fred for broad reach again, after changing course last night - onto NE, finally!
Hoping to avoid system ahead soon and also one soon after the New Year - may have to heave to, in order to let one or maybe both pass by a distance away - we'll see. In the meantime, nice to see the bright sunshine!

5am Low grey cloud layer ahead has disappeared - must have been overnight sea fog. Back to my bunk for more sleep - keeping an alarm set to keep eye on our course relative to wind - still veering so will need to gybe at some point soon, in order to maintain course.

10am Gybed around earlier - wind now from WSW, fairly light. Poled out the staysail - nice to have it working downwind. Cloud layer has come over - saw it coming (photo), with a very straight edge - wondered if it were fog coming but it's definitely above us! Can still see the edge of it ahead. Temperature not so bad - 12C/54F

Later: Great Shearwater circling us with rapid wingbeats. Very few other birds - but a Black-bellied storm petrel (photo) is also circling the boat quite often - sometimes two or three of them close by - they like the disturbed water we produce.
Breakfast now and then back to my bunk - haven't had all my sleep hours yet. 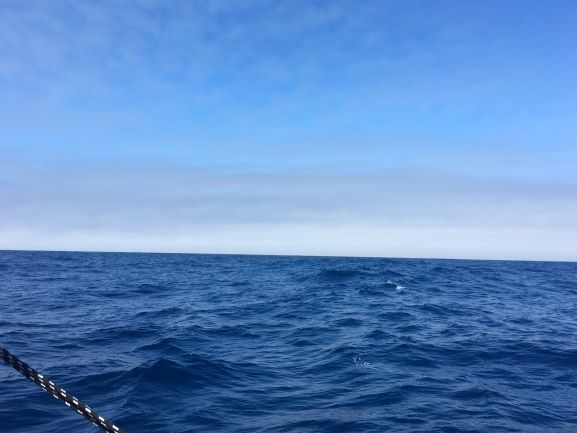 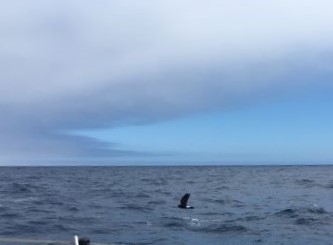