Wednesday 9:15pm Reported in to Pacific Seafarers' Net as usual, at 0310GMT on 14300kHz - Jane, NH7TZ, Net Control from Kauai, was clearer than she has been of late - she's happy to keep contact for as long as possible, even though we're now in the Atlantic.
Winds around 15kt from WNW - being on a close reach, headed just W of N, meant pounding into the seas ahead - never a comfortable point of sail.

Thursday 2:30am Close to dawn. Just changed on to starboard tack, in advance of wind veering to N from nearly NNW - the Low that will pass right over Uku, on 'One and All', will be passing E to our N sometime today but should only give us fairly light winds by comparison with the 30+ kt Uku will experience. I trust he'll stay safe - he's very experienced and ready for the event to happen - he said he'll keep going under just a storm jib probably (no mainsail - he'll drop that).

A beautiful sight when I went on deck to tack around .... Bright moon high up, ahead of us, a silver-bright Venus above the W end of the orange/yellow strip of light on the S horizon and a clear sky overhead. The wind and seas were well down and suddenly it felt so much more peaceful - I felt myself relaxing...

9:30am A solitary Black-browed albatross circles around. Clear sky has been replaced now by total grey overcast as the Low passing by to our N brings its cloud. Wind light just now and from N-NNE, with seas still well down - maybe 1-2m/3-6ft. We're just bouncing and rocking gently in the slight swell as we sail NW, close-hauled still, making just 3kt.

Wind could increase as the Low, heading E, passes closer - N wind now indicates it's still to our NW-NNW. When our wind is from the E, I'll know the Low is N of us.

Midday Wind NNE-NE so our course is now NNW. Total cloud cover still, slight rain.
Just got back down below - feels as though I must have been two hours on deck... Had to free the main halyard which I spotted a couple of days ago had got behind mast steps near mast top. Normally have strong twine in place between steps to stop that happening- but clearly not there now. Involved lowering mainsail completely, freeing halyard and finally raising mainsail again - without anything else getting caught anywhere. Suddenly realised that present very light wind gave an ideal time to sort it out. Sounds simple and quick - but was definitely not so!! All done now, ready for needing to hoist more sail later - as it was, I could not hoist full sail or even with a first reef - bad news in light winds!

2:45pm Just had a call from Megan Thomas, CBC Victoria - interview for an item updating on progress, to be broadcast later today or tomorrow. (Thanks to Luis Soltero and Redport/GMN for making that possible)
Wind has veered enough that we're nearly making our preferred course - will have to ease sheets from now until on a broad reach, as wind veers more over today and tonight. 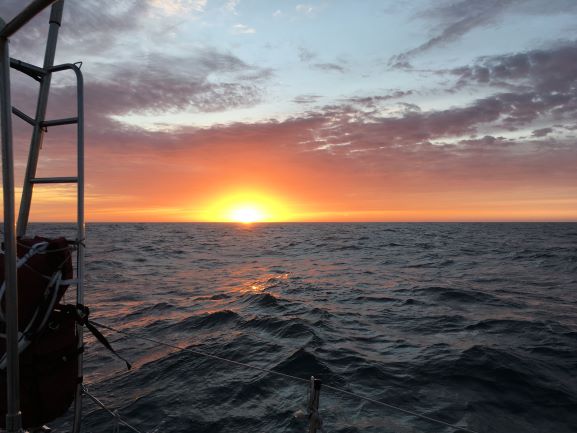