Tuesday - Christmas Day 4pm Wind has now settled down from the sudden gusting up to 25-30kt of two hours ago . Had to abandon my chat with Uku and get up on deck in a hurry to reef down and gybe so we could make our course in the strong SW wind that piped up so very quickly.

Just as I was tensioning the starboard running backstay, I realised we had company - a small group of dolphins were leaping and twisting in the air off the rough waves - often landing in the sea on their backs! Several times, one would smack its tail loudly on the surface - they were clearly having a great time and were circling Nereida ... around and around... I managed a few photos - maybe someone can ID them for me? I stayed on deck to watch them for quite a time - what a lovely Christmas present!!

6pm Seas are well up - easily 4-5m/13-17ft - so we're moving about a lot. Sun tried to get out a short while ago and I can see some blue sky off to the NW - but not where we are... After the rain, it's feeling cold and damp. We're on a broad reach making our course of 061T to a waypoint at 45S 40W - trying to get well above most of the Lows that keep coming by with strong winds!

Later - a lot of contacts made on radio - plenty of "Merry Christmas!" and "Feliz Navidad!" exchanged!
Discussion on weather had with Peter, ZL1PWM. Not looking good ahead if we keep heading NE or even N - suggestion to head NW for a bit to avoid next problem Low coming and then head NE once that Low has passed over - then there's another really nasty Low expected by New Year or just after - a real 'beast', reaching up to around 40-43S...

Wednesday - Boxing Day 10am Tacked around early this morning - at about 5am - trying to head NW - but with wind from WNW, could only make NNW, in fact, we're only making just W of due N - time to tack around and head W.

Midday Feeling a tad frustrated - not possible to head NW (to avoid bad weather was the idea) against NW wind! And the courses we're having to make to tack upwind are horrible... We were heading almost SW before but have just tacked around again so we're now heading N again. Going upwind immediately means banging into the seas - so not having a very pleasant or comfortable time just now...

Slept a lot this morning, but also chatted to Uku. He's resigned to being clobbered tomorrow by the Low I'm hoping to avoid by this change of course. He'll be right in the path of the intenifying system and there's nothing he can do about it... With winds forecast to 30+ kt, gusts will be higher, with seas to match. I should be below the Low, in lighter winds, hopefully.

Nice to see the sun shining now - clear blue sky and good wind - pity we're banging into the seas all the time!

Magnetic variation has now switched over to 2 degrees W - so I have to remember to subtract it from compass/magnetic readings now, in order to get True values. 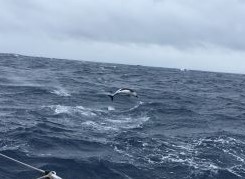