Monday - Christmas Eve 5:40pm Still a lovely sunny afternoon - water's on for tea with some Christmas cake (actually Dundee, but that's close enough, except for the missing marzipan and icing). Missing also are Brussels sprouts and roast potatoes with the roast turkey and chestnut stuffing, mince pies and Christmas pudding ... next year!
Let out second reef to speed us up a bit in light NW wind. Fixed the Hydrovane problem (I hope!) - took a time, perched at stern of boat but seas well down so not feeling at risk at all. Also untangled the lazy running backstay - the line had got totally twisted around itself and had become very difficult to tension or release. Need to do the same on the other side when it's not in use.
Have dried one carpet, two jackets, my boots and my warm, woolly hat - all in the bright sunshine this afternoon. It actually felt warmer (air temperature not so high, in fact: 10C/50F!)

7pm The tea was so good I had another (Calm enough now to have it in your lovely mug, Louise!) Been getting out food 'goodies' to spoil myself - olives, pate, hummus, a tin of lovely wild salmon I'll have with asparagus tonight - and chocolate...
Wind has died more - but seas are a good 4m/13ft - I thought they might have died right down by now, but clearly not doing so. Having a good look around to check on things on deck while it's easy.
Sun is getting close to setting. This really feels like (mid)summer!
A pair of albatross rested in the water very close by - and were rubbing their beaks together in affection - 'spooning'!

Tuesday - Christmas Day Merry Christmas! 5am - some of us were up early! Downloading weather files and emails - lots of Christmas greetings - thank you! We've been ambling along rather slowly all night, raining now. At 2.30am, took a photo of the Southern horizon - thin line of bright gold - sun not far below, clearly! Back to my bunk for more sleep...

11.15am Magnetic variation ZERO - 'True' and Magnetic' (compass) readings the same!
Grey sky and fine drizzle. Suddenly found us heading S! The wind had died and gone into the ESE... Gybed around but with almost no wind, we're drifting 300T (W of NW) at 1.6kt, despite the bow pointing NNW and sails (and Fred) trimmed for a close reach... At least we're no longer heading S, but it would also be nice to head E, not W! Will just have to wait for the wind to strengthen some more so we have steerage.
The Low developing not far to our N is clearly doing just that and we're on its S side, with pressure having dropped now to 993.5hPa from its earlier 1000hPa. Eventually, it will veer to SW and strengthen - according to forecast, in just a few hours' time .... Coffee...! Merry Christmas from the S. Atlantic!

1.45pm Finally back on course - saw we were headed SW after a wind shift so, after gybing around again, we are now headed NE... Still grey and drizzly, with light wind still, but wind should now strengthen slowly. 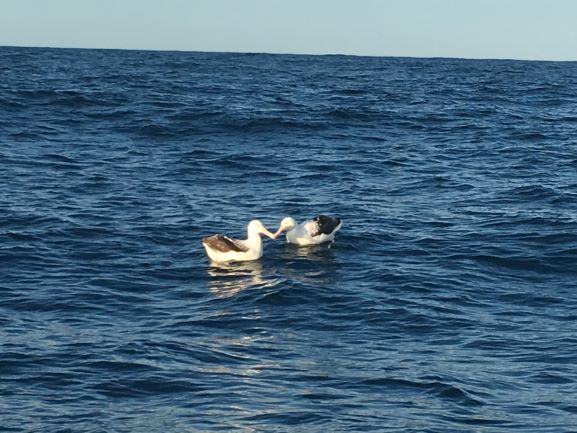 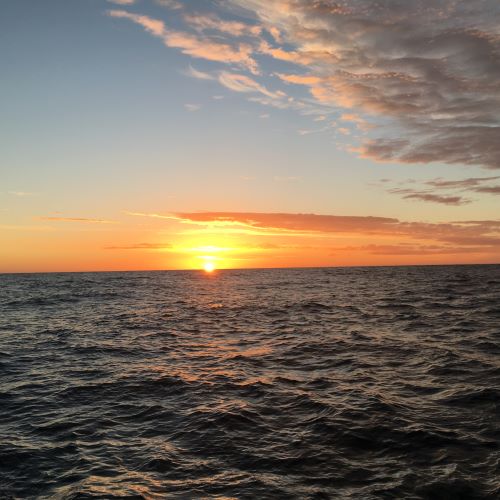 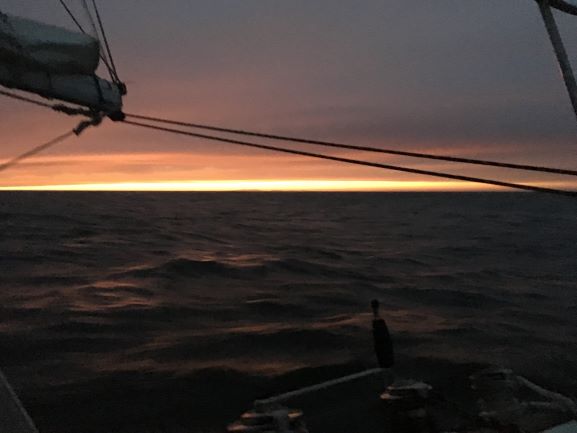 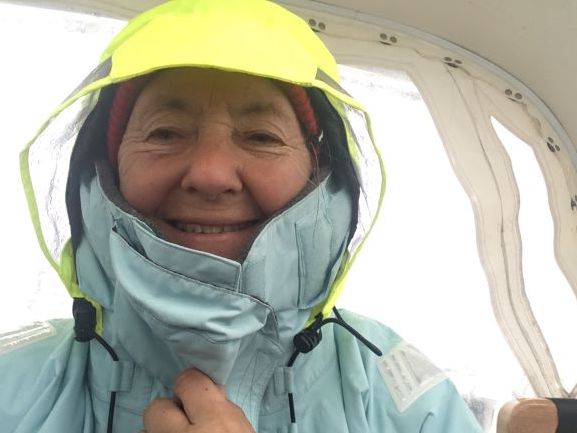