1pm Just had a call from Alameda RCC - a lovely woman at the other end said she had spoken to me when we were lying to JSD (series drogue) in rough weather the other day and she just wanted to touch base and see how I was - how very kind of her to call! I'd been called at 7am by her counterpart in Seattle so she'd presumably not been kept informed of my status since yesterday, when I spoke to Alameda while I was heading W-NW to keep away from another system.

Thanks again to Luis Soltero of GMN who has so generously loaned me the Redport Aurora terminal which has allowed such a lot of vital telephone calls and weather downloads over the last week of bad weather (and its aftermath) - all free of charge.

Thanks also to so many kind people in the Victoria area who have offered me help once I get back.

Just now, the sun is shining but the seas are still very rolly - from S at around 3m/10ft still and we're moving around a lot as they pass by I'd cut the seal on my engine and started motoring at 7.30am - we were making only 2.1kt NE under sail in light wind from almost dead astern at that point. Up to then, I'd been using my lovely Eberspacher hot air heater occasionally, to keep warm - it has been very cold and damp on board. But now I'm able to use a fan heater off the engine cooling water circuit to heat the cabin - saving on fuel, so long as the engine is running!

I caught up on some of my many emails, checked the weather, posted a position report, talked to Connecticut about my relacement drogue coming to Victoria and tidied up a few things on deck, after changing sails over onto starboard tack in the SE wind - still quite light at only 8 kt so I unfurled some more genoa to help our boatspeed. The mainsail is contributing also - it needed another sail tie to hold a loose section in place better. I then got some breakfast before hitting my bunk for more sleep - I'm feeling very tired, presumably the result of all my efforts yesterday over quite a few hours, retrieving the damaged drogue. I'm pushing a bit, to get into the Strait of Juan de Fuca - once there, the waters are quite protected and I'll be able to relax on the final leg back to Victoria.

6:30pm The sun has disappeared and light is fading fast. I'd had to furl in the genoa a few hours ago with the wind dead on the nose but the wind ha snow veered more to SE at 13 kt so the genoa can help and I can cut the engine for a time.. It's noisy!

Really enjoyed a Welsh rarebit a short time ago - I'd fancied some fried eggs all day and finally got around to toasting two slices of bread in a frypan, buttered them (with some Marmite added), then fried the eggs, melted some cheese on top of the eggs and finally turned them upside down onto the slices of buttered toast ... Another simple one pan dish - and very tasty too!

and of the sunset and swell - but failed to manage sending any of them... Need to sort that out - a software settings problem, I presume.

Seeing more shipping now - ofen quite close... Getting closer to the busy Strait entrance... AIS is so very good to have - they 'see' me and I 'see' them and we both can see how close we're likely to get to each other and when. 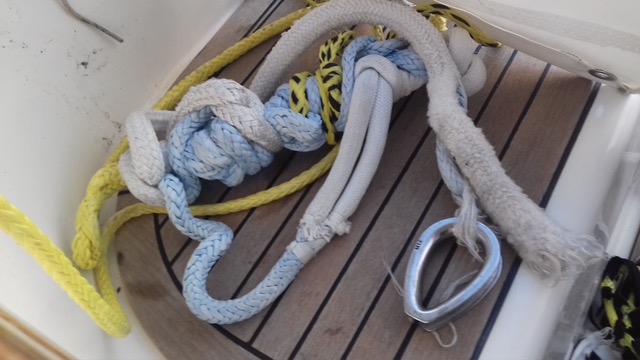