Friday 4pm A good thing I had breakfast - I've been on deck almost solidly since then.... just finished my morning coffee.

Tried to avoid one spreading, dark grey raincloud ahead - no way! Wind shifted around it, so had to change tack - one of many today... So the boat has had another good rinse off - actually a good thing since eveywhere was sticky and salty wet to the touch.

Amazingly, we managed to get in some southing before midday - but none at all since then. We're now 3 miles N of where we were then, and about 6 miles W of that position. Just gybed around (not possible to tack around - can't get through the wind with such low boat speeds), hoping to make SE or ESE at least, rather than NW - but no - worked fine initially, making ESE for a good 1/2 mile (!), but now we're heading ENE-NE... So very frustrating!! We're now just crossing our path from overnight... Wind: 5kt SOG: 2.4kt - of which a good part, I suspect might be due to a NE-going current. Our boat heading is SE, close-hauled, but our COG (actual course over the ground) is ENE-NE.

4.35pm Sun is getting out - wind is now 4kt and clouds dispering. I'm not sure what's worse - making way slowly in the wrong direction, but at least moving, or getting nowhere at all with the sails slatting noisily in no wind but some swell. I took a photo showing the boat pointing (heading) SSE but moving (COG) ENE... A ninety degree difference - we're being taken sideways!

5.15pm Furled in genoa totally - was flogging itself on spreaders etc and clearly doing nothing.

About to lower mainsail and tie in first reef. Will give me a chance to add 'nettles' to the sail's reef points - short pieces of line to tie in around the mainsail when reefed so the sail doesn't collect water when it rains. That happened earlier and it's not good for the sail to be dragging on the hard top with a heavy load of water trapped inside it.

Later: Good job done! Also added some bungy cord to the points below the boom where the boom end of the two preventer lines are stowed, to keep the short lengths of line clear of my bimini support. That had become a major problem at times. Also a couple of other small items seen to.

Unfortunately, that galley door hinge came away - seems T'd loosened an adjusting screw too much the other day - so now I'm having to resolve the problem of getting it back in place so the hinge stays together... (That meant undoing my hard work of yesterday of screwing into place the slightly larger screws....no winning! Having done that and got the delinquent machine screw into position on the hinge, the two holes for those screws aren't lining up - work in progress..)

10pm Decided to try sailing, instead of drifting around, on seeing a light wind from NNW at 7-8kt. Full genoa - not flogging - sailing smoothly - good! - if only we were on a better COG - presently only making ESE. Little swell - feels good!

12 midnight Well , we seem to have found a strong E-flowing current, for sure. Equatorial current? Maybe the counter-flow? If we head E, our speed is reasonable. If we head W, speed is abysmal if not backwards.... We were going quite nicely in around 8 kt of NNW wind - but COG was ENE-NE so we tacked around (speed being good enough) to head more S - immediately, our SOG dropped to 2kt or less and our course, instead of being similar to our heading, was far different - wind now has veered to N from NNW at 6kt, so now I'm seeing: SOG 1.2kt, boat speed 1.5kt, COG 154kt. We're definitely not Speedy Gonzales just now!

Saturday morning
Lovely view around sunrise of pink cumulus and stratus in the distance with moon still visible in the western sky, just before 7.30 am PDT.
We'd just had another washdown from a raincloud. Nice to be able to wipe down the windscreen with fresh rainwater.
Had better wind for several hours later overnight and into morning - ENE-E. 6-7kt seems to be the norm just now.
Fred struggling a bit to keep us roughly on course in such a light apparent wind - but just about coping... Still have a couple or more days of even less wind, maybe - and expected from more S, which is bad news for our resulting COG!

Radio bands are jumping noisily over this weekend - a major International Radio Contest - who can make the most contacts with other countries??! Jim, WB2REM, was in Havana, Cuba, instead of his home in Florida, and was on his usual frequency of 7163 but with the special callsign of T42T - I had good copy on him, and he on me, so we made a good contact, as did quite a few of the morning 'regulars' on 7163. I heard Japan, Indonesia, Australia, as well as USA & Canada, of course - people trying to make contact with others from all over the world on any (legal) frequency they could find to transmit on.... I had to smile as I tuned in to different frequencies and heard so many people making 'CQ Contest' calls!

11.30am Woke up from a short nap - needed to make up for lost sleep overnight - and found wind had veered to ESE, so had to adjust Fred's steering angle and trim sails for close reach.

1200 PDT - end of Day24. We made just 28 n.ml. (DMG) to the SE over the 24 hr period since yesterday's midday position - so much wandering around and that current clearly taking us ENE.
We're now 2600 miles due W of Costa Rica - haven't got as far S as Panama yet - but should 'arrive' there soon. 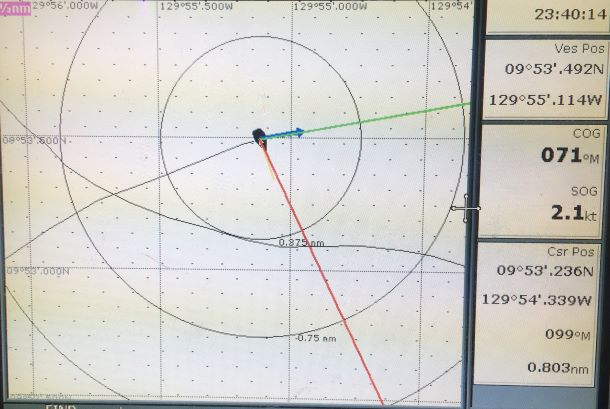 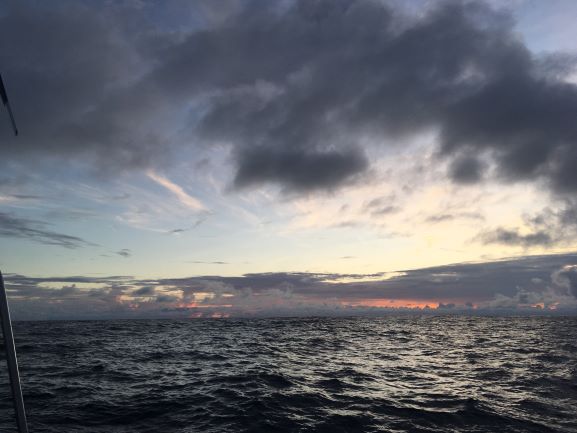 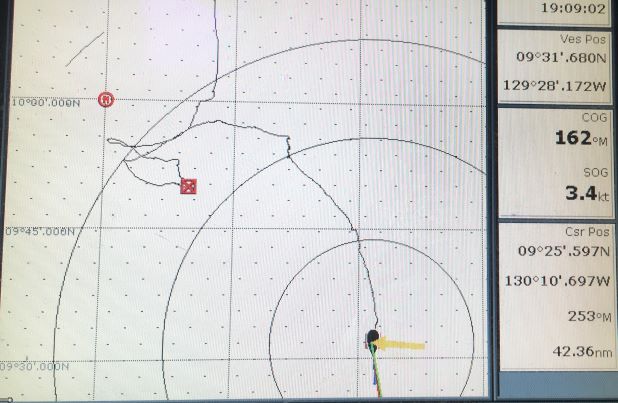