Note: Will be live on BBC Radio Solent Breakfast Show again - Wed morning, soon after 0830GMT. (Can be listened to on Internet. Waiting for confirmation from Studio)

Mon 1.30pm Finished posting of blog and position/weather report. Deck was dry before midday - but now we're in middle of an area of drizzle, ambling at 1.6kt in W-SW wind of 4-5 kt. Fred is doing well at keeping us going! No deck jobs can be done just now - so will be trying to fix galley locker door-hinge...

3:15pm Fingers crossed - hoping the galley door hinge has finally been dealt with. The top screw had found a hole last time - but in the wrong place. So out with that and try again.. What would we do without a headlamp and mirror to see around a corner?? I not only had to wedge myself firmly in place with a swell running but also had to support the door with one leg against the adjacent companionway steps while I tried to fix the problem. Decided the plan should be to move the door to expose both holes and fix the screws into that. That went fine - except now the door would not close - damn! Needed to adjust the hinge... Unscrewed the adjusting screws - just enough but not too much... Couldn't move the hinge part into its correct position... Damn again! Then suddenly, the door moved into position ... Tightened up the adjuster screws - yeah! The door closed properly! Will be closing it very carefully from now on...

3.30pm Another downpour - suddenly felt the boat heeling the wrong way - we're hove-to yet again with the wind having suddenly backed into the E from SSW... Poor Fred was doing so well in the light wind up to now - but that was too sudden a change - backed the genoa with a 10kt big wind shift. The good news is we're actually drifting on an excellent course - SSW!! We'll wait to see what the wind decides to do. When the rain stops, the wind will probably veer again and then we can sort things out sensibly.. Maybe it's time for a cup of tea?

4pm Pressure has dropped to 1010hPa from 1013 4 hrs ago.. Rain has almost stopped. Grey rainclouds covering the sky ... Wind varying: SE, was 7kt, now 10kt. Maybe time to get sailing again. Weather files are showing this could continue for several days more, with light wind preventing escape.... Band of rain down to 4-5N.

6.15pm Still raining - showing no sign of stopping - solidly grey and miserable-looking everywhere. Wind down to 4-5 bkt from ENE, boat speed almost zero and SOG 1kt. I'm amazed that Fred is coping so well, keeping us going in such extremely light conditions. Genoa keeps giving up and then just about filling again. I'm waiting for us to grind to a halt... If that happens, maybe we'll keep drifting SW in a slight current. The main Equatorial current must be not so very far to the S of us now - and that's W-going.

Finished preparing food for tonight - but decided too early to cook as yet. Had to finish up what started out as a big chunk of ham - so it's ham, onions and potato omelette tonight and chopped ham in Alfredo sauce with pasta tomorrow.

Tues 6.20am Wind continued NNE-NE overnight and we made a good course, around SE, most of the night. At 6am, I woke to find us drifting NE, hove-to, in wind from SSW, but that didn't last long - after sorting out the sails and then finding wind was back in NNE, up to 16kt for a time, we got sailing again - heading S in ENE, becoming E, wind which finally eased to 8-9kt. I'd like to keep heading SE if possible, to avoid the calms developing to our W soon - but we can only head where the wind allows us....

7.40am Was back on deck - fine drizzle - wind had died to 6kt and veered to SSE - so had to gybe around to get onto starboard tack to avoid heading W... As wind veers more, we should head more SE - or that's the hope! Later: SOG is 2.4kt in 7kt of wind - we're making a SE course.

NOTE We've finally passed south of 8N - that's a major milestone in this mammoth struggle to get south!!

10am Solid rain all morning = just took off raingear having let out reefs- I'd forgotten reefs were in overnight from when squall came through. With wind below 5kt now, we need the extra sail area.. W wind now - making heading SE difficult - having to make do with heading as close to S as conditions will permit. Boom is on a prevehter - the wind is so light that it bangs about in the swell otherwise. If the wind veers much more, we'll need to gybe to make a SEly course.

1200 PDT - end of Day27. We made another tiny gain further South - just 42 n.ml.(DMG) over the 24 hr period since yesterday's noon position ... Satellite photos show big mass of cloud centred where we are now.... A small but nasty storm is forecast to develop overnight into tomorrow just N of us - hopefully, it will pass us well to N but would be nice if we could head S a tiny bit faster...!

Photos are of track over last two days and of view aft from companionway - not much wind or solar power just now. Small 'mushroom' is the Aurora terminal, courtesy Redport/XGate - enables me to post these photos via the Iridium network and download frequent weather updates. SSB/HF radio still being well used as well, for voice contact and emailing. 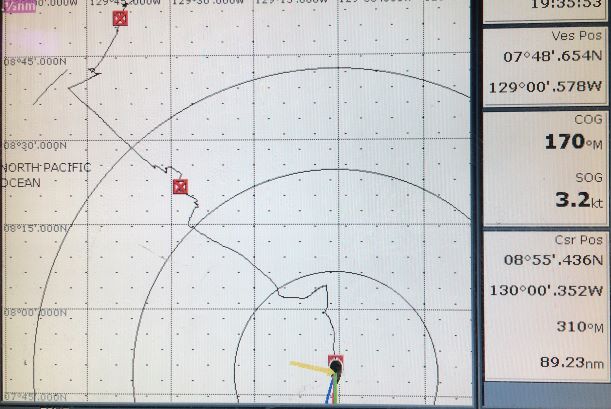 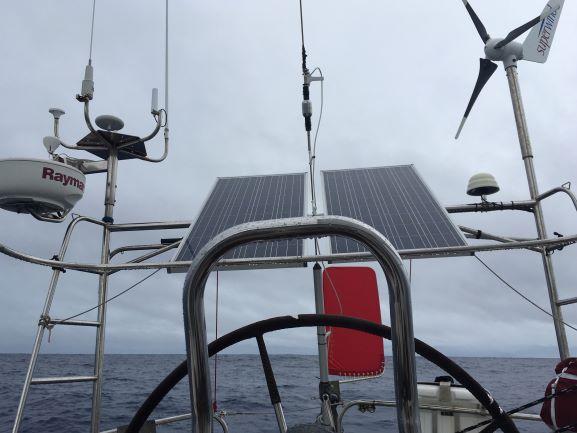