Sun 4pm Tea's made! Feeling good having achieved several things today. It was very calm this afternoon so I decided to start on the deck jobs.

I'd been delighted to find I had a replacement bolt & spring for the Hydrovane ratio control knob - so that was a relatively easy fix and was done first, using plenty of Loctite. Importantly, it means that Fred can be put back into action which saves a lot of battery power.

I'd been wondering why our battery usage seemed high - I noticed today that I had the radar scanner on standby - that takes power but is now switched off. No need for radar out here, especially with AIS available with an alarm function.

The next job I decided had to be to fix the genoa foot shackle. The genoa (big headsail) is in constant use at present, so it would be really bad if it were to give a problem - as would have happened if the pin of the shackle had come out completely before I noticed it yesterday. My main concern was that the pin might have bent under the strain of being half out, making it impossible to screw it back in place but, having released the halyard tension a little after furling the sail in, I was able to get enough leverage to persuade the pin to go back where it belonged - a big relief. I'd really expected the job to turn into a bit of a nightmare!

As I was 'mousing' the pin with some wire, to make sure it couldn't come unscrewed again, I felt the wind picking up - there was a big grey raincloud ahead... Perfect timing with two important jobs completed. I was also happy not to get burned by the sun which was mainly behind cloud while I was on deck. The two staysail jobs and solar panel connectors will have to wait for another calm patch - I'm sure there'll be one very soon!

Time to enjoy some Danish blue cheese on crackers with my tea - a late lunch... Wind's back down from 12 kt to 6 kt from SE - we're going really fast, at 1.4kt SOG :-).... but heading SW. Any heading that involves some southing is good!!

7.30pm Getting dark, with grey rainclouds all around - giving us some wind: 9 kt from ESE. We're making 3.4kt. Most of the afternoon, we were making less than 1kt!

With the genoa fully unfurled in light winds, I'd tensioned the halyard and tidied up the long length of rope.
There was a small group of birds flying nearby, swooping low over the water - skimming it on long, thin wings, dark above, whitish below, a 'cap' on their heads... Lovely to watch. Shearwaters, I think - I must check my birdbook - they were very similar to the Atlantic shearwater but we're in the wrong place. Greater shearwater, maybe?

10.20pm Keep having to change tack as wind varies from SW quadrant to SE quadrant and back again.

Taking a long time to get nowhere....

Mon 3am Another change of tack - we had been only making less than a knot heading WSW but now, heading SE in SW wind we've been making 4-5 kt - amazingly good feeling to be making a half-decent speed in a straight line! (Note: We made 20ml before the rainsquall at 8am) We're slowly zig-zagging our way S - but oh-so-very slowly...

I'm hoping for some more calm seas again later today so I can get to the solar panel and staysail problems - would be nice to get those out of the way. Back to my bunk now for some more sleep.....

At 8am it was raining hard - lasted half an hour before the squall was over and the wind died totally. Wind had backed suddenly with the raincloud, so we drifted hove-to for a time. Eventually, wind veered into SW again - but only 6kt. Despite the 1st reef's nettles, the sail was a bag of water - they weren't tied in tightly enough - and maybe not enough of them? Had to raise main if only to get rid of the water in it. By 10.20am, with Fred back in charge and heading slowly SE once again, I was finally down below, needing my coffee and breakfast!

11:15am Just glanced at instruments - wind hss veered right around - to WNW. Being under wind-steering, with Hydrovane Fred in charge, has meant we followed the wind around... So we're now making SW, at all of 2.6 kt in 6kt of wind. SLOW ... but a good course. 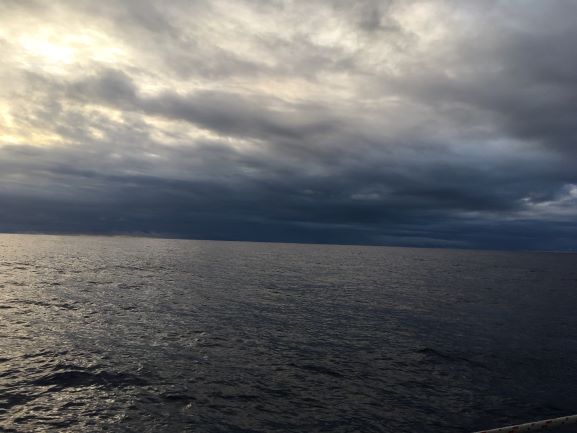 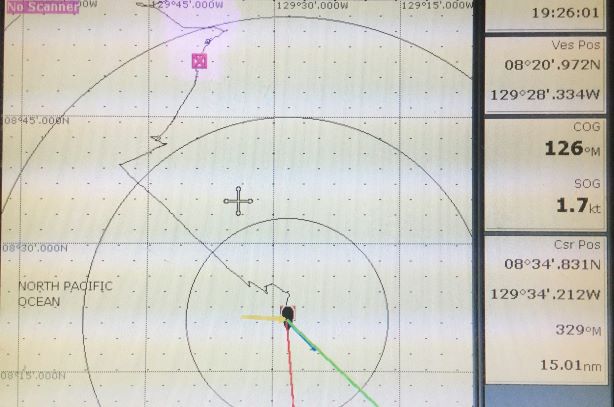