Sat 4.30pm Having a great sail this afternoon - no squalls in sight and making a reasonable SSW course in ESE wind of ~8kt. Swell not at all bad - just a bit 'bouncy' but we're rarely being knocked around. A lot of rather broken cloud cover, looking slightly showery ahead but nothing too threatening... Let out the reef I'd left in, in case of squalls.

Forecast is still showing the wind disappearing by later tomorrow for a day or so... We'll just have to take it as it comes...

I just investgated the solar panel output. I tied a large towel over each panel in turn (was able to cover the lower one third), and checked the displayed output before and after removing the towel.

The result was very clear-cut but also somewhat surprising:
1) The port side panel was giving nothing - no difference in output seen whether it was partly covered or not.

2) With just one-third of the starboard (working) panel covered, the output dropped to zero - most surprising since my understanding was that the cells in the panel keep giving a power output even though some of them are shaded... I'd expected to find a one-third reduction in output - but not so.... Nada, nada... Clearly the fault is connected with the port side panel and/or its wiring - that much is now clear.

While there, I looked at the butt connections between the wires from the panels and those leading through the pole to down below. They were looking slightly corroded inside the butt connector and the outside of the connectors was feeling sticky with wet salt.

I've had this exact problem before - despite the adhesive-lined, heat-shrink butt connectors seeming to make a good, well-protected connection, they are prone to internal corrosion - maybe the salt water seeps up inside the glue... or in via damage caused by the crimping?? With hindsight (always so good, right?), I suppose I should have checked those connections before leaving - but I keep assuming that those connectora are 'bullet-proof' if used correctly.

The good panel's connector didn't look any different from the bad one's - so it seems I'll have to hope for some slack in the wires to work with and re-make all those connections - and hope the tinned wire used is doing its job. That will need very calm conditions since the work has to be done in situ. It's likely to need mean all four being re-made - two red (+ve) and two black (-ve)...

I've still to grapple with the locker door hinge.... but will relax for now over my tea, sittng out in the cockpit and enjoying hthe sailing and the scene.

After that, I went to check on the staysail foot situation - the shacke holdingthe foot in place has been undone for a time, waiting for calm conditions to allow me to unfurl the sail, loosen the halyard and re-connect the shackle - but I came across a few other problems - detailed in my previous report, so I shan't repeat here... All a bit of a worry....

10.15pm If I didn't know I'm alone out here on the ocean, I'd have thought someone had lit a bonfire! The moon was rising - an orange-yallow ball of fire, lighting up the clouds with its eerie light. Only as it climbed higher did it gain its usual serene silver appearance.

Sun 4a.m. Have been up quite a while. Apart from making a brief contact on the HF radio with Jim in Cuba, I've been mainly trying to keep the boat moving in 4-5 kt wind which shifted first to S and has then slowly veered into SSW, occasionally SW.

8am We're surrounded by big, spreading, grey rainclouds, sometimes with a patch of blue and tops of white cumulus in between. Just came out from the heavy rain and a 15kt wind under one of them an hour ago. The wind had switched in no time from SW to SE and backed the big headsail (genoa). I had been asleep but was woken up by the change in motion - and from nearly being thrown out of my bunk by the boat suddenly heeling the other way... Now we're driftimg around at 1.8kt with no steerage in 4 kt of SE wind - must go back on deck to see if I can persuade the boat to head in a sensible direction if we're not to drift in circles yet again...

A waste of time! The boat is now pointing WSW but speed is 0.2kt (with full sail) and we're drifting NW... It's 8.40am - Time for coffee and breakfast.

My hair was soaking wet so I brushed it - and gave it a cut..! Just 6-7 cm (2 1/2 inches). I'd been thinking of doing it since before leaving - wasn't too difficult, taken in two halves, and there's that much less to deal with.

9.15am Tried again heading more S. Couldn't bear to see our hard-won southing disappear slowly! So far, so good - the bow is headed SW and we're also making way SW at 1.9kt in 6-7 kt wind from SSE on edge of a raincloud - hint of misty rain. Expect wind will increase due to cloud, so speed might inrease also. We'll see how it goes. Wind speed is very up and down.

10.45am Just discovered a major problem with Hydrovane Fred - normally very trusty in control of our steering. I'd been wondering why he'd had a problem keeping course overnight... The bolt holding the vane section to the rudder gearing mechanism has disappeared out of the control knob. So Fred now has absolutely no control over the windsteering rudder. I'll see if I can find the identical size, pitch and screw thread on one of the bolts in my spares... Yippee! The missing item found in my spares kit. Now for some blue Loctite... and we'll soon be back in business. 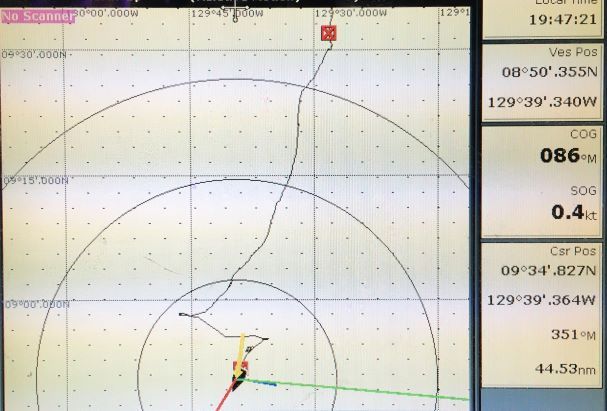