Wind still up around 20-24kt - not likely to subside for a day or more.

Seas are also still well up and making it difficult to do much on board - anything done takes several times longer than on land! Genset is still waiting for changing over of the seawater pump (in order to change the impellor - what a crazyy design feature....! In doing that, I'll make sure water is filling the system - presently has an airlock, it seems - that will get interesting - "open seacock, fill pipe, close seacock, fit pipe..."!!) Can't wedge myself firmly enough in these seas to manage to work on it - frequently being thrown around, in addition to the continual rolling. I'm surprised the Hydrovane windsteering is coping - although I did head us up on less of a broad reach to help it in these big seas after the mainsail was backed a couple of times following a particularly hard hit each time - a problem common to all wind steering systems. A good reason, among others, for having the preventer on the boom.

I've finally cracked the problem of how to send photos - even managed to reduce the file size so they're not too large, hopefully. They still take quite a time to send so I probably shan't send them every day.

Enjoyed a mushroom omelette tonight - don't think the mushrooms would have lasted much longer with no refrigeration. Had to throw away some fresh milk that had separated - interestingly, it neither smelled nor tasted off. On its way to becoming yoghurt, maybe?

Ran the engine for battery charging after midnight - seas are still well up. Almost no stars visible in the totally dark sky - mostly clouded over. New moon around now so no moonlight at present.

Dull grey overcast - not quite drizzling but feeling as though it's trying to! Wind has dropped quite a bit so unfurled all the genoa. Feeling a lot smoother now but still rolly with the occasional bigger wave hitting us still.

I've been checking weather info regularly and want to keep around 130W to stay in good wind as we head S - so I think it's time to gybe around, to head back that way.

Our course up to now has kept us away from the even stronger winds and possibly even rougher seas closer in to the Capes Blanco and Mendocino - 23-25kt was quite strong enough for me, given a choice!

Gybed onto port tack just over an hour ago - furled in some genoa to help balance - still two reefs in mainsail with wind still mainly over 20kt, often 24kt. Feels as though conditions are possibly slowly easing. The sun is managing to get out quite a bit, which warms me up nicely!

Had to spend time rearranging things in the cabin around my bunk on the (new) starboard side - that now being the lee side. Should stay on this tack for quite a time, with wind slowly veering to a little more to the E of N and our course slowly bringing us to 130W or thereabouts. I bought a great organiser recently in an auto store - holds all manner of things safely and conveniently. Instead of hanging behind a car's front seats, it's hanging nicely just above my bunk and is proving to be really useful. Of course, now we're heeling over the other way, I've had to retrieve and fix in place a few other items which happily tried to move across the cabin! All good for when we get into the really rough stuff!

I'll post a photo taken two days ago - of the big seas coming onto our stern. They were steep and only 4-5 seconds apart - which is why things have been so very rough.

Position & weather report posted to Winlink.org and Shiptrak (using my US callsign of kc2iov) not long after midday PDT (=1900 GMT): 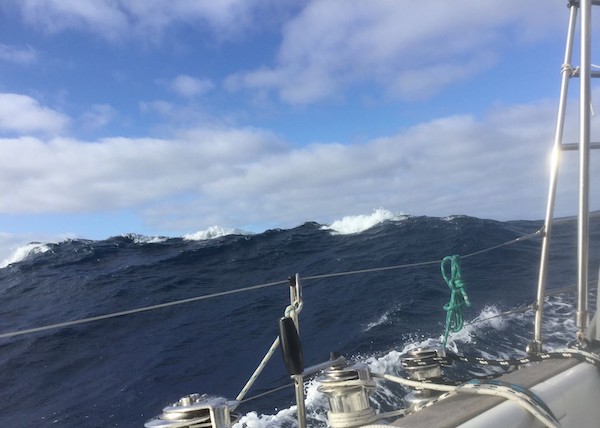 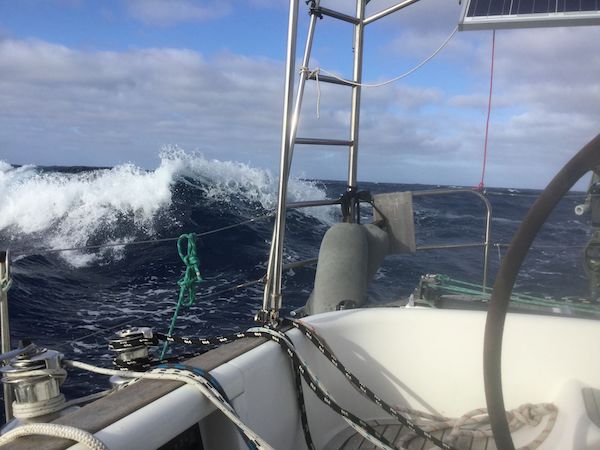