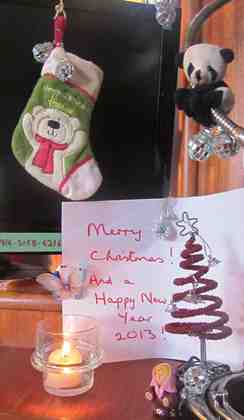 Hope you all had a great Christmas - as I did!

What a difference a day makes!! After the total sunshine and clear sky of Christmas Eve .... by dawn on Christmas Day there was fog all around. Not very thick and the sun did try hard to get through in the morning - unsuccessfully! Even later in the day, when the fog lifted, the sky was overcast - and stayed so, all through Boxing Day as well.

Not that it spoiled my day in the slightest! I played my Christmas music in between other music, sang along often, exchanged Christmas greetings over the radio and by email, had a phonecall (at 1 am!) from my family and had a lovely peaceful day, with plenty of 'goodies' to enjoy.

Would have been nice to have been making more than 1-2 knots of boat speed in 2-4 kt of N wind, but we did manage to stay on course in the calm conditions and I was able totally to relax and enjoy my Christmas - even had a present later in the day, towards dusk, when a Wandering (or Royal?) albatross - the giant kind! - passed by without pausing, headed SE as we were... always a lovely sight. Just a bit too far away in the poor light to identify which kind exactly but a good enough view to be unmistakeable ...!

Overnight, it began to drizzle and it felt much cooler with the damp air, but it had stopped by mid-morning on Boxing Day. With the wind having increased by morning to all of 6kts, occasionally 8-10kt, we were able to continue making our course towards Cape Horn at just over 4kt, goosewinged, in not much swell still.... but later, the wind was back down to 6kt, so we ended the day only making around 3 knots - so slow...!!

I'm concerned about my satphone - the Iridium handset display has gone blank since sometime after a phonecall I received early on Christmas Day - it seems rather dead, although clearly getting power still (I can hear a faint noise when I hold the handset close to my ear) - not good news.... And I heard that another, later, call to me was unsuccessful. My laptop didn't like being connected to it when I tried testing it by making a data transfer yesterday (which didn't work - got a 'blue screen'!) so I'm really dependent now on my radio connection for emails, without the satellite phone as a back up.. ...

Even more relaxed on Boxing Day - enjoyed a good read while listening to some favourite music, with an occasional hot drink, while snuggled up in my cosy bunk!! Conditions are so easy at present, that I've finally got to reading a book - working my way through Patrick O'Brien's Capt Aubrey/Maturin set of novels.... Now on to book number four in the series, a book I'd started soon after leaving in October,... but have just had to re-read the beginning again - no problem, they're so well-written and 'of the era'! Every now and then, I get up on deck to check on things.. Mid-afternoon... had to gybe the main, with wind from starboard quarter. Might have to gybe it back again - wind has just veered to NW....

Gave myself a haircut - it was getting very long and that gives less to wash and brush!