Left before sunrise to make Bahia Frailes by early afternoon.
Newly-cleaned speed impellor not working properly - I'll have to remove it again and clean it some more later.  Can't calibrate it enough at the moment to compensate for its poor performance.
Lifted kayak out of water so it wouldn't slow us down -lots of barnacles to be  removed before stowing it deflated for the 700 mile passage north next week. Almost no swell here.
Hoping to leave Cabo early Monday to head to Ensenada in light headwinds, becoming calm at times.  Might have stronger headwind around the Cape -hopefully for just a short time! 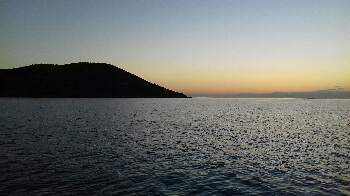